A common usability issue occurred because the various panels and sidebars would get in the way of what you’re trying to accomplish during editing. The guest list sidebar slid out from the right and took up a valuable amount of real estate, blocking the entire screen on smaller devices. Worse is that these different modes and panels each had their own slightly different behavior and appearance.

The new control panel combines the item library, item editor, common toolbar actions, and guest list into one interface. It will automatically dock to the left or right of the screen when you rotate to landscape, or on bigger devices like iPads so it’s not covering up content. Also, you can now easily swipe it to the other side or close it to move it out of the way. 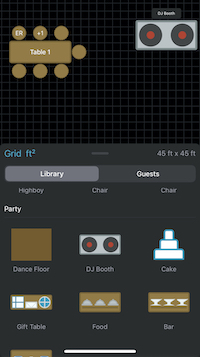 The item editor seamlessly covers the control panel and has the exact same appearance and affordances for docking, moving around, and swiping closed. 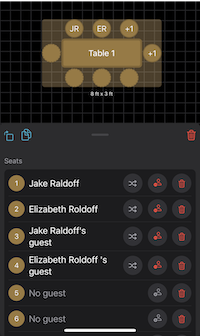 One of the most requested items in feedback has been the addition of stand-alone chairs. This makes it possible to create an auditorium-style seating layout, such as for a ceremony or theater event.

This was also a good opportunity to redesign the highboy table item so that it actually looks like a table, in both round and square appearances. 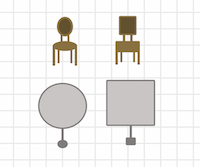 The guest list is now integrated into the control panel as a dedicated tab next to the item library. These two modes often competed with each other and now they can be easily toggled back and forth as needed.

All of your guests are now sorted by table with the unseated guests at the top. Tap and hold on a guest to access a quick menu and toggle attendance or delete the guest. Add new guests, view the guest report, and import a guest list all from the guest list.

The guest editor was one of the most dated corners of Seat Puzzle. In the spirit of standardizing appearances throughout the app, the guest editor has been updated with a modern and consistent design.

Also new, you can now see and change the table for a guest right from the editor.